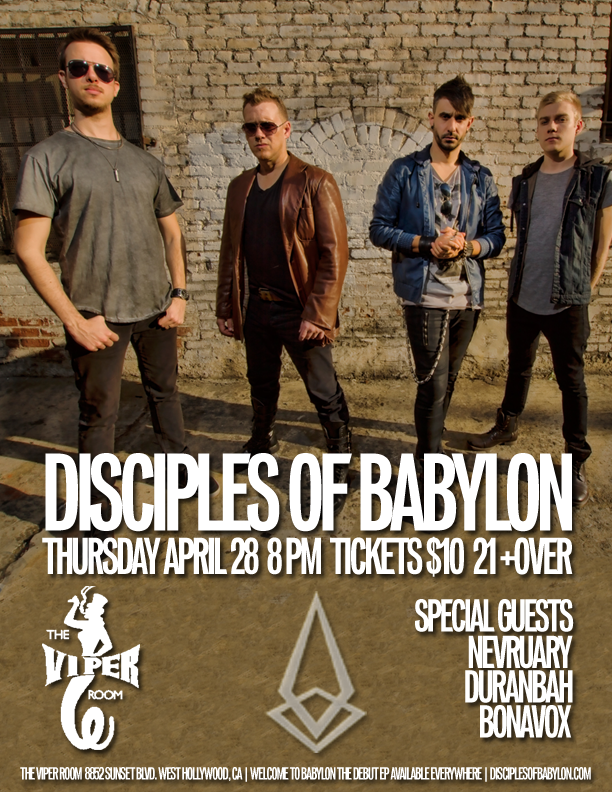 Disciples of Babylon are pleased to announce their return to Hollywood, in their first headlining performance at the world famous Viper Room on the Sunset Strip Thursday April 28th. Doors open at 8pm with special guests: Nevruary, Duranbah & Bonavox.

The Viper Room is located at 8852 Sunset Blvd. West Hollywood, CA 90069 in West Hollywood. Admission is $10, and members of the public 21 years and older are encouraged to attend.

Ticket link: http://tktwb.tw/21Ch4Js
Disciples of Babylon come from Hollywood – and so does their sound. Big, broad and epic, their music conjures up the huge stadium bands – Muse, Foo Fighters, Queen, The Who, Stone Temple Pilots, U2 and Led Zeppelin.

Disciples of Babylon seek to create music that combines elements from all the major eras in rock – delivering the ultimate proof that rock is here to stay.

When Eric Knight and Ramon Blanco met at an alumni event at the Musicians Institute in 2012, the initial idea for Disciples of Babylon was born. Gui Bodi bassist of the band is also a graduate from the renowned elite music school and drummer Chris Toeller the newest member of the band rounds out the band's line up.

Their debut EP, “Welcome to Babylon”, was released in September 2015, and was produced by Grammy-winning producer Andres Torres as well as mastered by Grammy-nominated mastering engineer Joe LaPorta, most famous for his work with Foo Fighters, Killers and Vampire Weekend, at the legendary Sterling Sound Studio in New York. The result: world class sound!

Before joining DOB, all the band members had already launched busy pro careers and notched up a slew of indie productions; some had supported bands like Aerosmith, KISS, Dave Matthews Band and Kid Rock.

With a strong lineup and versatile repertoire, they plan to conquer the world with their philosophy of “Welcome you all to Babylon”.

Find out more at: www.disciplesofbabylon.com

We are excited to announce that Disciples of Babylon will be vying for a spot on the upcoming kickoff to the Vans Warped Tour entitled The Road To Vans Warped Tour 2016 in Alaska. Featuring acts: Crown The Empire, Sleeping With Sirens, Sum 41 and many more. Tuesday April 5th 2016 The Slidebar in Fullerton. In conjunction with Anger Management & ReverbNation. 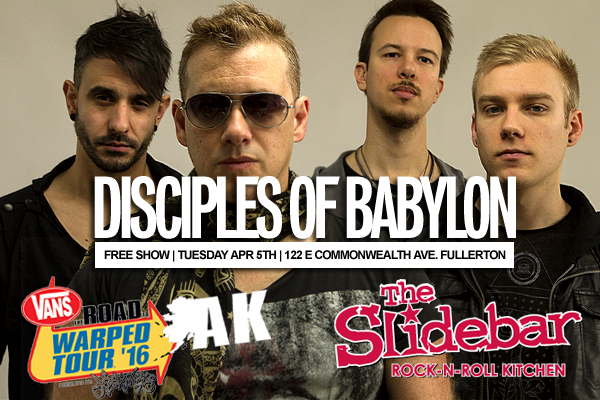 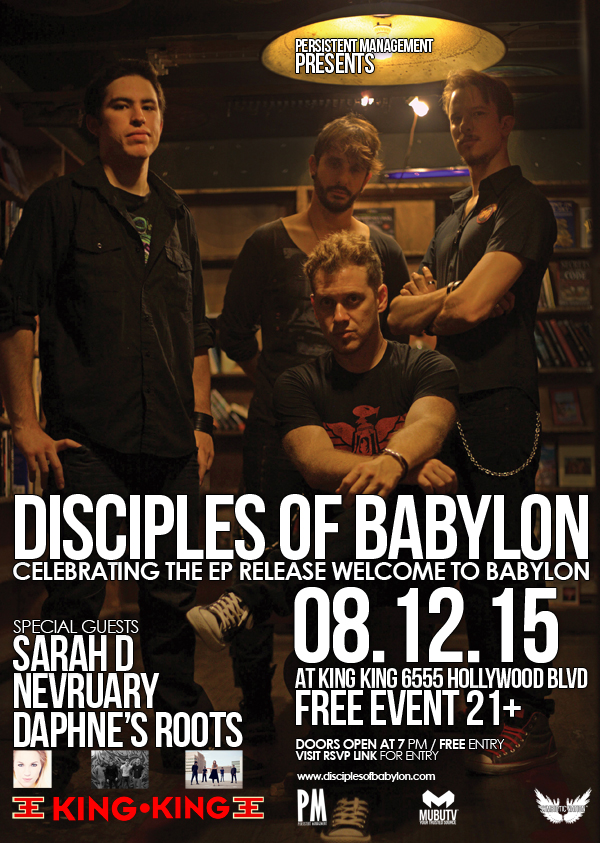 HOLLYWOOD, CA – Los Angeles based hard rock group, Disciples of Babylon have announced the release party of their debut EP entitled “Welcome to Babylon”. The 3-song EP includes the band’s single, “Karma” as well as “Arrived” and “The Great Pretend”. The EP was produced by Andres Torres (La Santa Cecilia) and mastered by Grammy-nominated mastering engineer, Joe LaPorta, whose previous work includes projects for The Foo Fighters, The Killers, Imagine Dragons and Vampire Weekend. “We are incredibly proud of this first recording”, said front man Eric Knight, “Although brief, we wanted to make this first statement one that would set the tone for what’s to come”.

Disciples of Babylon will mark the release of their debut by holding their EP release party at King King in Hollywood, California on Wednesday August 12th doors open at 7pm. The free event celebration will also include the premiere of the band’s official music video for their single “Karma” which was released earlier this year. Special guests performances by Sarah D, Nevruary & Daphne's Roots to round out the evenings festivites.

Disciples of Babylon’s EP, “Welcome to Babylon”, will be available on all major digital music retailers as of September 4th. The official music video for “Karma” will also be available on the group’s website, www.disciplesofbabylon.com, and YouTube as of August 13th.

For additional information regarding the Disciples of Babylon and their EP release event at King King in Hollywood (or to RSVP for the event), please visit their official invite link for tickets at: www.persistentmanagement.com King King is located at 6555 Hollywood Blvd. Los Angeles, CA 90028 in Hollywood. Admission is free, and members of the public 21 years and older are encouraged to attend.

Hollywood, CA - (July 21, 2015) Here is the first look at the new album cover for the upcoming EP from Disciples of Babylon entitled 'Welcome to Babylon'. The cover was revealed all over the bands social media today leaving fans in anticpation on the upcoming release slated for September 4th digitally. "The way this cover came together really just pieced together, and then somehow magically all the elements came in at the right time", says DOB vocalist Eric Knight.

The artwork & digital Illustration was done by. artist Eric Gagnon (who's worked on developing the digital landscapes on WB video game Batman: Arkham Asylum among others. "It was just a stunning piece of art, I tracked Eric down and he was thrilled to let us use it.", says the vocalist "It wen't perfectly with the concept of this being a modern day Babylon and with the EP's title." The glyph design was created by Charles Sabbagh III.  Layout & typeset was handled by Carlos Diaz.
The EP will be available for pre-orders online via iTunes on July 28th. Visit the band online at their official website: http://www.disciplesofbabylon.com for more details. Also watch them perform live at their FREE EP release concert in Hollywood at King King on August 12th. Get your FREE tickets here. 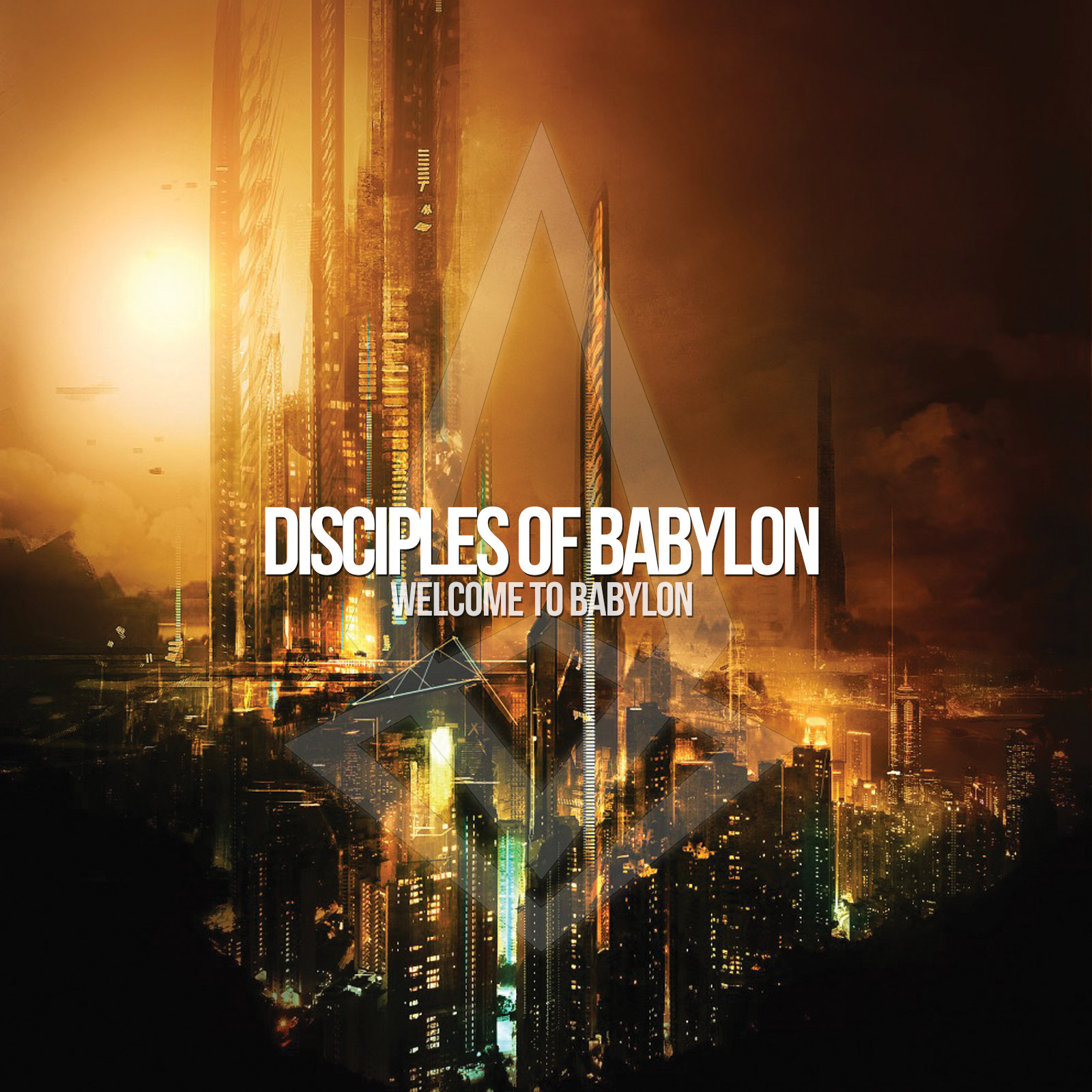 Today marks the official release for the Disciples of Babylon debut single "Karma". The track is taken from their upcoming debut EP entitled, "Welcome to Babylon" which will be released later this year.

"We wanted to come out with guns blazing" proclaims lead singer Eric Knight. "For our introduction to the world we wanted to make a strong statement. With Karma we feel we have achieved that quite nicely."